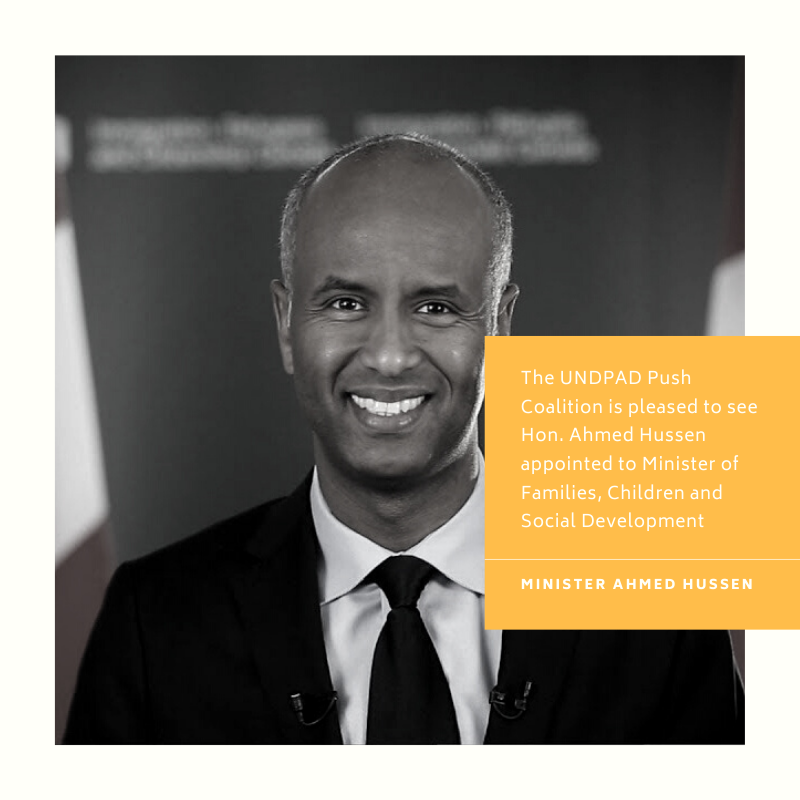 Posted at 15:57h in The Decade by undpadpush 0 Comments
0 Likes

The UNDPAD Push Coalition is pleased to see Ahmed Hussen appointed to Minister of Families, Children and Social Development but is disappointed that he will once again remain the only Black member of Trudeau’s cabinet.

Despite language of “diversity”, “inclusion” and “representation” in government, Black communities have yet to feel included and proportionately represented in decision-making processes. A lack of effective representation of people of African descent constitutes a deficit of perspectives, of human resources, of capacity, of diversity and of opportunity for this country that we all call home.  According to Dr. Alvin Curling, former Speaker of the House and MPP, “ The announcement of this new cabinet demonstrates that we are not ready to address the issues of racism in this country, it lacks the strategic force that is necessary.”

In January 2018, PM Trudeau announced that the Government of Canada would recognize the United Nations’ International Decade for People of African Descent (2014-2025), and committed to addressing systemic anti-Black racism in Canada.

Despite evidence of the Prime Minister sporting Blackface, Black Canadians appeared to believe that these commitments would be upheld and that there would be a new opportunity for Black Canadians. According to Operation Black Vote, Black Canadians turned out in great numbers to support PM Trudeau and Black votes largely contributed to the election of the Liberal party in 2015, and again in 2019.

“Black Canadians continue to play an important role in the electoral pendulum, yet our access to decision making remains severely limited, as evidenced by this new cabinet,” said a member of the UNDPAD Push Coalition. “We call on Prime Minister Trudeau  to work closely with Black communities to develop a national action plan that centers the specific needs of Black communities in Canada and to champion the rights of people of African descent, just as he has rightly done for women, LGBTQ communities, and people with disabilities, among others. It is time for a new deal for Black Canadians.”

The United Nations Decade for People of African Descent (UNDPAD) Push Coalition was formed with the singular focus of ensuring that the federal government follows through on its commitments made to Black communities through the 2019 budget in order to address historic and systemic issues facing our Black communities, thereby improving the condition of Black people living and working in Canada. The Coalition emerged organically out of virtual gatherings of Black community serving organizations. Our initiatives are national in scope and focused on capacity building within our communities versus individualized client service delivery. For more information on UNDPAD Push Coalition please visit www.undpadpush.com.