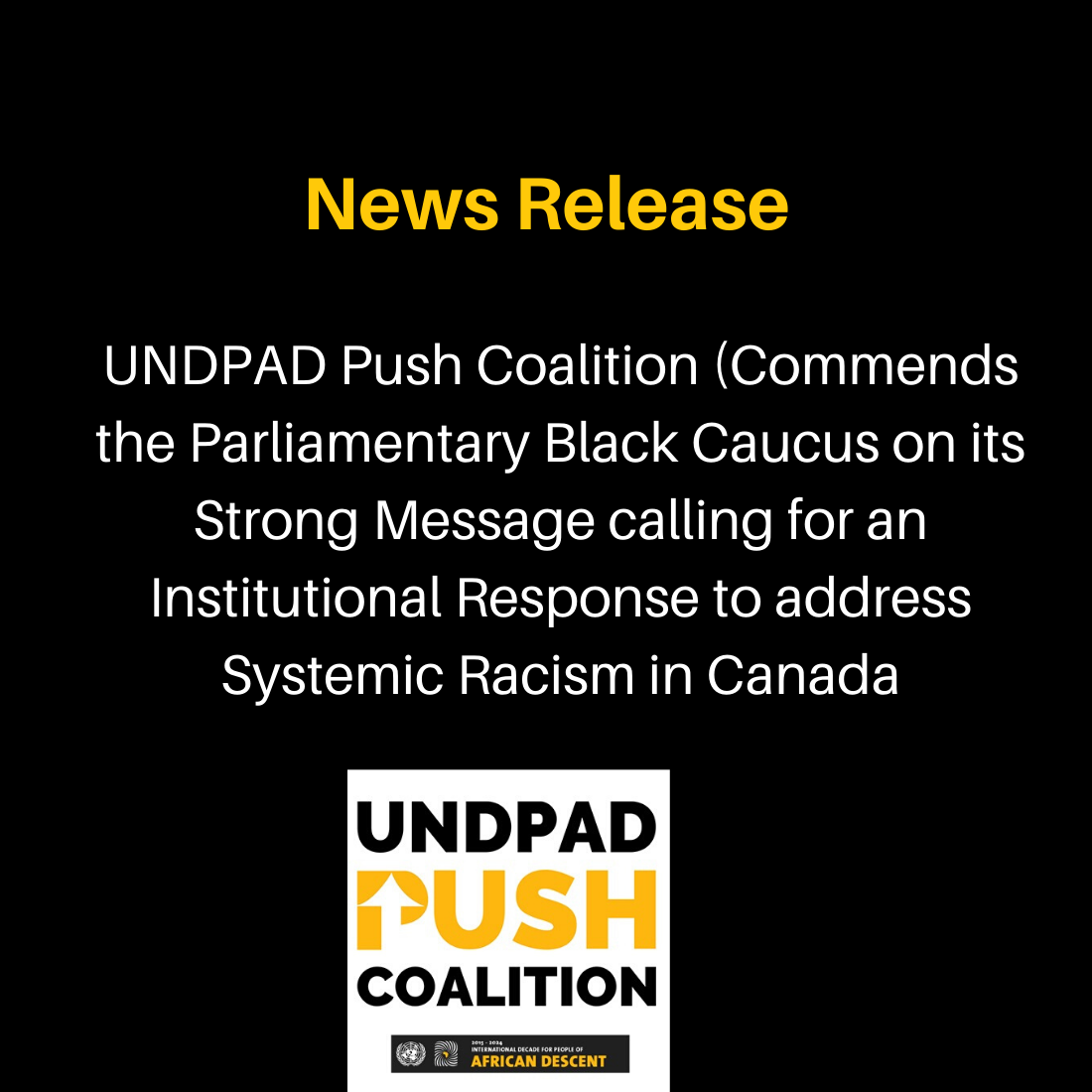 Posted at 18:33h in Uncategorized by undpadpush 0 Comments
0 Likes

The UNDPAD Push Coalition commends the Members of Parliamentary Black Caucus and its allies for issuing a strong statement​calling on the government of Canada to take action against systemic racism in Canada and its corrosive effects on the lives of far too many ordinary Canadians.

Apart from the Prime Minister’s personal commitment​ made to Black Canadians on the adoption of the UN-decade, this announcement is the strongest united message to date from any federal government body on the need for systemic and institutional change to address anti-black racism and other forms of racism and exclusion within Canada.

We are pleased and encouraged that this joint statement centers around the four themes we have been pushing to see results on these past four years,” said Andrea Pierce, Economic Inclusion Lead for the UNDPAD Push Coalition. “It is nice to see our hard work and recommendations have been heard by the members of the MP Caucus and other members of Parliament. Now we need to see this translated into real action for our peoples in this country.”

The UNDPAD Push Coalition, which is comprised of over 75 community organizations and leaders across Canada, has been working at the community level, as well as with Parliamentarians and allies to document and prioritize the needs of Black Canadians. This information has been shared with the federal government and serves as a starting point for taking concrete measurable actions to address anti-Black racism, rather than starting from scratch.

The Coalition calls on those parliamentarians who have not yet signed on to the pledge to find ways as elected officials to publicly support and advance the ongoing work to make Canada more inclusive for all, and in particular, Black Canadians.

Throughout our history there have been some who prefer to maintain and pass down societal advantages based solely on skin colour, Pierce said. “But that is not right. Not fair. Not Canadian. Not anymore. The time to act is now.”

Canada’s economic progress here at home and in the larger global competitive marketplace. We have put forward reasonable plans and recommendations.

“For years now, many of these same recommendations have been pushed by activists and community partners striving to achieve results within the International Decade for People of African Descent ” said Floydeen Charles-Fridal, Executive Director of Caribbean African Canadian (CAFCAN) Social Services, organizational lead for Meeting of the Minds. “Now let’s translate these recommendations into concrete measurable results and timely action.”

The UNDPAD Push Coalition and its partners are optimistic that the commitments outlined within the Parliamentary Black Caucus statement can bear results quickly as there are only four years left in the UN decade and during this time governments and MPs can change quickly. We, as usual, stand ready to work with the federal government, allies, and our broader Black communities to achieve positive results for Black Canadians. Take our pledge and join in.

The United Nations Decade for People of African Descent (UNDPAD) Push Coalition was formed with the singular focus of ensuring that the federal government follows through on its commitments made to Black communities through the 2019 budget in order to address historic and systemic issues facing our Black communities, thereby improving the condition of Black people living and working in Canada. The Coalition emerged organically out of virtual gatherings of Black community service organizations from across Canada, dubbed Meeting of the Minds, which were hosted by Caribbean African Canadian (CAFCAN) Social Services. Our initiatives are national in scope and focused on capacity building within our communities versus individualized client-service delivery. For more information on the UNDPAD Push Coalition please visit www.undpadpush.com.